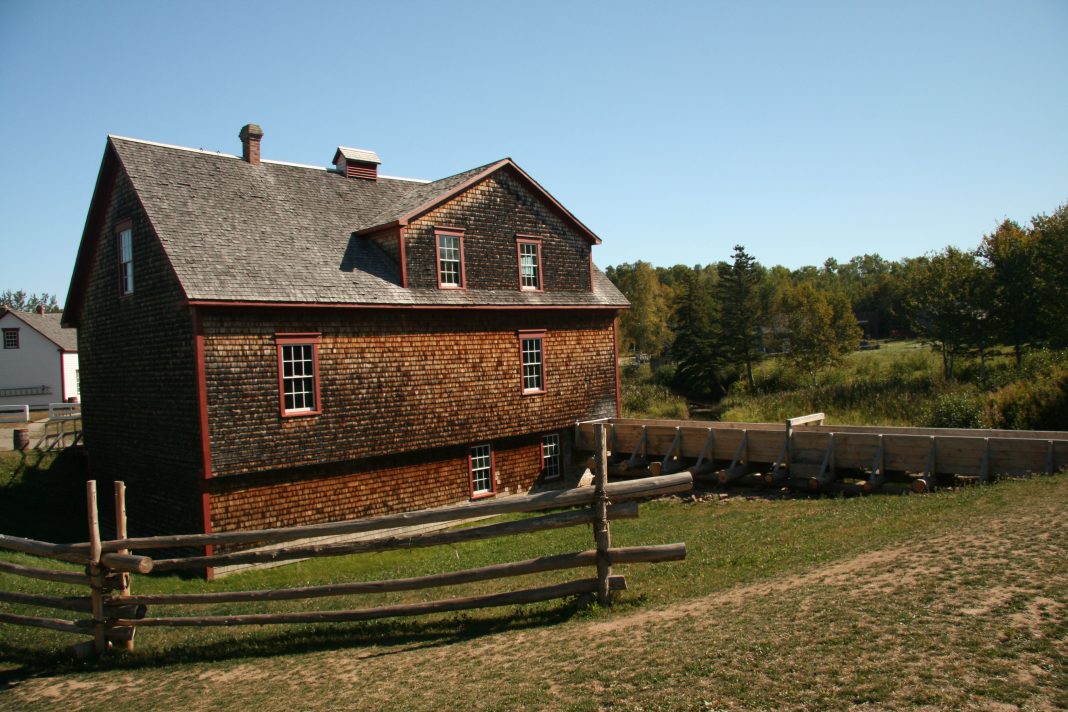 One of Eastern Canada’s supreme scenic drives follows the roads around the twisting, hilly Gaspé Peninsula. When you reach the southern edge of the peninsula you can see for miles, looking down across small farms and scattered forests to the beautiful blue waters of the Bay of Chaleur.

Jacques Cartier, the French explorer, sailed into this bay in 1534 and called it the Bay of Chaleur, referring to its warmth. It looked like a great place to live. The location had a very pleasant micro-climate, an area a little warmer than the surrounding region. The possibilities were endless – there was good soil, gently sloping hills with trees, the water teemed with fish, and the settlers came!

The first French settlers in North America were the Acadians, and this is the perfect place to learn about their lives. On the New Brunswick side of the bay, near the little town of Carquet, lies a Historic Acadian Village. Here in the Acadian Village you will see how the early pioneers lived, worked and built their homes and businesses over the years from 1770 to 1949. This peaceful location would make anyone yearn to live there. More than 40 historical buildings portray life as it used to be, and the reproduction of the pioneer lifestyle is enhanced by very well informed and personable staff outfitted in period costumes, and going about their daily tasks in traditional ways. The overall experience of your visit to the Acadian Village is a warm and friendly retrospective.

A Region Steeped in History

The first group of French settlers arrived in 1632, and the small colony grew as more and more pioneers arrived from France. They had a troubled life, caught between the whims of two powerful nations. The British took them over for a time, and then they were returned to French control. Then the British returned, they were fearful of rebellious leaders among the Acadians, so they expelled about 6,000 of the Acadians, destroyed their homes, and burned the barns. Families were ripped apart, and the Acadian settlers were either sent back to Europe or southward to the North American colonies.

Many of the Acadians found new homes along the New England coast, and in 1764 the British started to allow small groups to return. Over the years, many of the Acadians found new homes in New Brunswick, Nova Scotia, and Prince Edward Island. They were hard working, industrious people, as you can see here at the Village. Their hard work is reflected in the buildings and the neat and tidy farms. As you explore the buildings, you will be able to understand what life was like back in the pioneer days, as the staff portray the lifestyle in a very carefully historic manner.

The 17-acre site of the Acadian Village may not seem very large until you start your walking tour. The wandering trail that winds through the village seems to have a surprise around every bend. It’s like being a kid again, exploring a big new neighbourhood. To the modern visitor, everything in this historic village is new and exciting, even if it is based on a lifestyle that is hundreds of years old! It can take hours to follow the path, although the entire walk is only a shade over 2 km.

The walking tour is like a stroll through a park, and it feels like you have turned back the hands of time as you walk slowly past the old rail fences.

Gracing the top of a slight ridge, a tall wooden building with three dormers draws your attention. In the paddock nearby is a two-wheeled cart, waiting for a one-horse engine to pull it through the streets. A large white home, with a comfortable looking veranda, looks down across the settlement towards a small garden. All of this is backdropped by a thick, green forest… stop for a moment and listen – Is that the ringing of a church bell? Back in the day, this would not be drowned out by the hustle and bustle of a modern town. What a peaceful setting in which to live!

There are two restaurants to ease your hunger pangs, the Café Bistro at the reception centre, and La Table des Ancetres at the Dugas House, which serves Acadian food. There are also two snack facilities along the walkways.

If you want to sleep over, the Chateau Albert Hotel can set you up with a night “in the comfort of the past,” meaning there is no television or telephone to interrupt your relaxation. Even the wallpaper and the sheer curtains are what you would have seen had you stopped by in historic times.

One of the special programs is a series of cooking workshops where you can learn to cook a traditional Acadian meal in a real 19th-century kitchen. If you like lobster, there are nine times during the summer when the Café Bistro restaurant at the reception building hosts lobster suppers accompanied by well-known local musicians.

The Nicholas Theriault General Store visitors can browse through items from the previous centuries. There is a museum atmosphere in the store, yet these items are available to purchase for your own home.

The Village portrays a wide variety of trades of the Acadians. A stop at the Cobbler’s Shop shows the shoemaker hard at work shaping leather to make a new boot, or perhaps a pair of shoes. His old bench has seen a lot of hammering upon its surface. Take a close look at the various pieces of equipment used in the trade – for centuries, shoemaking was an art, and not everyone could do it successfully. The cobbler didn’t have a computer design to show him the size and layout for different shoes and boots, yet he crafted each item perfectly. Look at the wide board floor – in the pioneer days there were lots of big trees, and cutting wide boards was common.

Take a few minutes to watch a cooper (a barrel maker) at work. This craft requires shaping the boards that will make the barrel sides so that they taper at the ends and sides allowing them to be curved and pulled in at the top and bottom, which of course is a smaller diameter than the centre of the barrel. Again, as in all the old shops, the staff use hand tools without the benefit of electricity, although this is one of the first industries to became mechanized as the demand for barrels for fish storage increased. The barrels were a good, secure way to ship the fish overseas.

The blacksmith was one of the most important workers in any settlement. He made the horseshoes, the door hinges, the latches, and many other items that were necessary for everyday life. The blacksmith’s skill at forming steel with only a hammer and two pieces of steel at the proper temperatures is quite remarkable. He’s the man who could take an iron rod and shape it into a hoop of the proper size to fit the wooden wheel on your wagon. He would heat it just enough to expand the circumference so it slipped over the wooden rim, and let it cool and contract to fit tightly on the rim. Can you believe that he did this without a calculator! The blacksmith shop was usually set away from other buildings because the constant pounding of steel hammers on steel anvils would become bothersome. Also, the sparks generated by his work would be hazardous to nearby wooden buildings.

The cabinet worker was also a man of skill. Some of his work bordered upon genius. The replica shop at the Acadian Village has two large doors at the front to accommodate shipments of lumber and materials going in and out of the shop. His array of saws, planes, and chisels helped him create furniture, buckets, and even pulleys for the mill. To run his wood lathe, he used a wheel and a crank.

Small communities needed a printer. News often came in with a traveller and a local newspaper was able to pass the information around the community. The printing press could also create advertising brochures, posters and signs, which were the forerunners of today’s advertising industry.

The most common building materials of the era were stone, used often for basement walls and homes, and lumber. Trees were abundant, and a small local sawmill was extremely important to make framing timber, siding, and floors.

To make the shingles for a roof, a shingle maker and a shingle mill added to the versatility of wood from the forest. The shingle maker took cedar blocks cut to 16” long, quartered them, and then split off thin layers to create each shingle. He thinned down one end of the shingle to allow overlapping when the shingles were placed on the roof. The same technique continues to protect our homes in the modern era, although the shingles are now made in an automated process.

If a tinsmith moved into your community, you would be very lucky. He created pails, mugs, cooking vessels, cookie cutters, and the pans to hold your food. If there was a local tinsmith the settlers could save the cost of purchasing these items from far away places. The tinsmith shop at Acadian Village is a replica of a business operated by a tinsmith named Ouellet. It is located close to the road, as was traditional in the period because the products were of great interest to the passing trade. 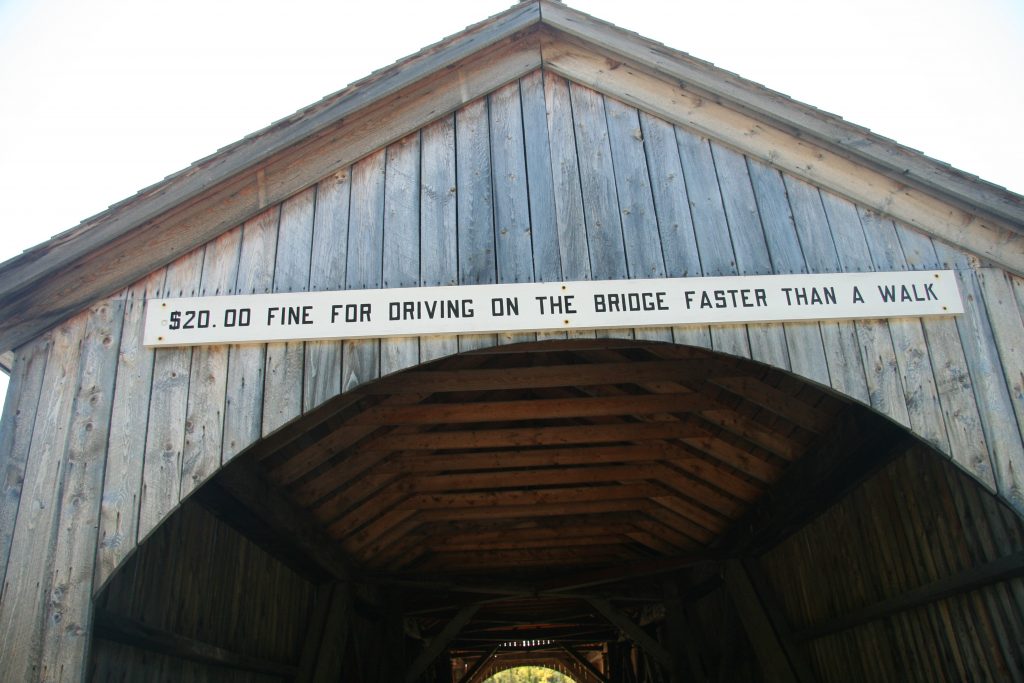 Your walk through the Acadian Village passes through a fine old wooden bridge, complete with a warning sign to keep your speed down, or else! At the end of the lake, there is a water-powered mill. Mills of this type produced the ground wheat for flour, or crushed grains for animal feed.

For an insight into the early farm life, stop at the Robichaud Farm, dating from around 1835. There is a rather large open styled farmhouse and the staff demonstrate sheep shearing and the methods used for cleaning the wool and creating yarn on a spinning wheel. Making cloth using a loom shows how they created the cloth necessary for clothes and blankets.

The Cyr Farm, dating from around 1841, has a clay outdoor oven. From this relatively modern oven, would come the delicious aroma of freshly baked bread. It still happens here, every day. At this farm the staff demonstrate how to use flax to make linen.

As you walk from building to building, you can follow a transition in construction that reflects the different eras. If you are interested in carpentry, you will note the different forms of construction and the use of different types of fasteners. The earliest homes were of log construction, flattened with an adze, and pinned together with big dowels driven through specially bored holes. Later buildings might show the square logs using dovetails to hold them together at the corners. Other homes are frame construction, showing the changes occurring after a local sawmill was established nearby. The exterior walls might be covered with vertical boards or wooden shingles. Each house or barn is a living relic of the past.

The Historic Acadian Village of New Brunswick can be a relaxing day trip, especially if you’ve been touring and spending a lot of time driving.  It seems that everyone you meet is delighted to answer your questions, and welcome you in the very friendly Eastern Canadian way.

This summer, why not turn your RV towards New Brunswick, and enjoy an adventure in Canadian history at the Acadian Village!

The International Plowing Match is perfect for RVers