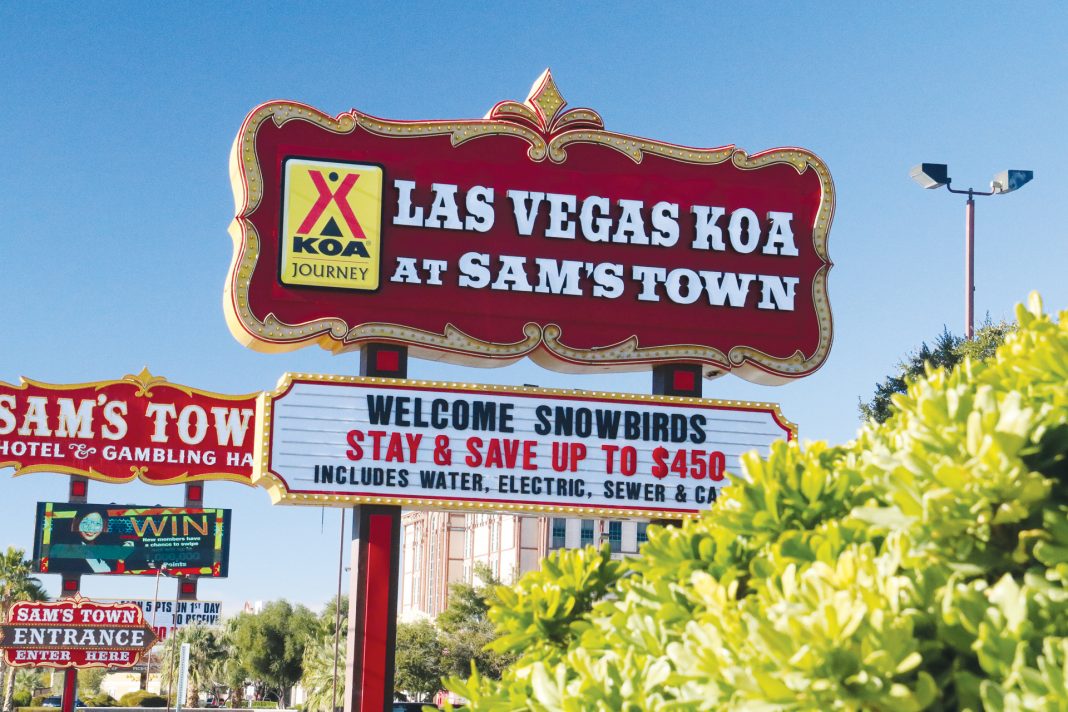 After a 13-year stint at Circus Circus, the Las Vegas KOA has settled in to comfortable quarters at Sam’s Town. If you are looking for a luxurious campground, this is the place to be for your comforts.

The Sam’s Town area an oasis in the glitz of the City of Las Vegas. Located on the Boulder Strip, an alternative to the Las Vegas Strip, many of the casinos in this area are spaced well apart, so driving your own vehicle is the answer here, especially if you are travelling in a motorhome and towing a car.

When you stay at The KOA at Sam’s Town, you everything you need is within a short distance from the campground. When you want to gamble, Sam’s Town is one of the Boulder Strip’s largest casinos. It also features a massive indoor covered park, a 56-lane bowling alley, and a movie theatre with 18 screens.

Food is an important part of your enjoyment at Sam’s Town, and the options are extensive.

The indoor park is only one of the Las Vegas miracles. People have flocked to Las Vegas for years, not just for the gambling, but to see the striking free shows such as the volcano, the dancing fountains, the sinking ship, and others. Sam’s Town indoor park is a great place to walk, to listen to nature, and to quietly think. As you walk, surrounded by the trees and the rocks, you will enjoy the simulated outdoor beauty of the park. A large waterfall splashes and chortles as the water sends its sensuous murmurs through the trees and along the trails. The park looks and feels very spacious, enhanced no doubt by the fact the top of this atrium is ten stories above. The twitters and songs of colourful birds further add to the outdoor feeling you get in this park. You will likely be surprised by the Who, Who, Who of an owl. You look, and there on a distance stump is a large owl, rotating its neck, as if spying on you. And watch for the big bear which is on the prowl.

Another surprise is in store for you. Suddenly a wolf peals out a lonely howl as only a wolf can do. This is the signal that the Sunset Stampede and Laser Light and Water Show is about to begin. This phenomenal show is brilliant and exciting, and is one to put on your list of fun things to do in Las Vegas. It usually is featured at 2 p.m. at intervals until 10 p.m. The laser lights are spectacular as they focus on the cliff which features fountains of water jets rising high into the sky, and there, on the top of the cliff, is the wolf, peering this way and that, as if wondering why all the activity below. In the midst of coloured jets and mist, a moving finger of light begins to write. It draws all sorts of figures on the rock, until it begins to look like a newly discovered cave whose walls are covered with ancient drawings. And there is more to come! The rocks are wiped clean, and the drawings are replaced with figures of running animals and flying eagles, and an unexpected square dance. At times the laser show looks like an all-out attack of Star Wars on the planet.

After the show, in fact almost any time of the day, you can select a place to dine. The Angry Butcher features steaks for those who have a distinctive taste for great food. For relaxed, casual dining you would find the Firelight Buffet to your taste. There is a wide choice in foods and many stations for omelets, meat carving, and salads to name a few choices. The supper hour is busy and offers relaxed lighting for a cozy meal. We enjoyed a nice steak and lobster at the T.G.I. Friday’s, another casual dining room. There is also a myriad of fast food options in the food court if you don’t have the budget or the inclination to visit one of the famous Las Vegas restaurants to enjoy gourmet food.

The Sam’s Town KOA, although farther from the main Strip, is easy to reach. I remember driving around and around trying to find the entrance to the old Circus Circus KOA, and that in busy traffic. At Sam’s Town, just follow their website instructions and it’s an easy drive in, right to the registration office. Most sites are drive through with some back-ins over by the wall. The streets are wide enough for easy maneuvering, although sometimes unnecessarily partially blocked when someone parks in front of their rig, on the street. You can get propane here as well. Another advantage of being on the Boulder Strip is the ease with which you can leave town. You are on the outside of Las Vegas with good streets to take you away.

You probably haven’t come to Las Vegas to stay at the Boulder Strip. Sam’s Town offers rides into the Las Vegas Strip in their courtesy buses. You climb aboard across from parking garage 2 to ride to the California Hotel and Casino, the Fremont, and Harrah’s Las Vegas.

Las Vegas is always changing, presumably to bring back people who have viewed all the free shows, so they can, of course, spend some time and money in the casinos. Unfortunately, these changes have taken away some things that were exciting. The battle of the pirate ships, smoke and flame, and explosions is gone. It was an old show, but very good.

Still running, is a function you will enjoy, the Fountains of Bellagio in front of the Bellagio Hotel and Casino. Spraying out of the 8 ½ acre lake are over 1,000 little jets of water that are choreographed to match the tones of some popular singers such as Frank Sinatra.

Not to be outdone, the Mirage has a volcano. Its rumblings and explosions blast sound across the square so that you feel as well as see the volcano in eruption. Once the volcano begins to erupt, the fiery lava is hurled skyward, while outside the crater jets of flammable gasses give off an eerie glow. All of this is more spectacular in the dark of evenings. If you are there in the winter be sure to wear something warm. Las Vegas can be uncomfortably cold, especially at night. During its quiet periods, a waterfall runs from the volcano’s cone.

Casinos on the famous Las Vegas Strip are large, and when you are walking the distance between them seems endless. There are a few free rides that can make touring the area much more enjoyable:

There are several attractions that you can visit while staying at Sam’s Town KOA. The Hoover Dam, less than an hour southeast, is always a big draw. It was built in the 1930’s to control flooding on the Colorado River and to generate electricity. The highway used to twist snakelike through the cliffs down to the dam, cross the dam, and then climb tortuously out again. It was a challenging, scenic drive, ruined when authorities essentially closed the road across the dam forcing a long detour for heavy vehicles and RVs. Now a new bridge crosses the canyon just south of the dam. It can be a very busy place with thousands of people per day arriving. Parking can be expensive, and there are charges for a tour of the dam. The tour is not for the claustrophobic, and the electrical generators may cause problems for those with pacemakers or similar medical aids. Some people do the simple thing, and book a tour from Las Vegas and leave their vehicle at the KOA.

The Valley of Fire State Park is about 80 km northeast of the city. The scenery is reminiscent of the backdrop views in a John Wayne movie, but even more rugged. The brightly coloured sandstones resemble those of Arches and Zion National Parks, and even Canyonlands. Born in dry deserts, windblown sand dunes grew large, became compressed, and were soaked through with iron tinted water, resulting in the wild, vivid reds and yellows that we see. To the mix, bring in some earth movement, faulting and uplifting and you have a landscape that can run your camera wild. Visit the park when the sun is low. Morning, and especially later afternoons will bring out colours that even your dreams can’t duplicate.

Perhaps when it is time to leave Las Vegas, you might consider turning northwest 230 km to Death Valley. Some would do this as a day trip, but it’s a slow drive in places, and Death Valley is a massive park and needs to be explored, slowly.

For all the desert country around Las Vegas, try to avoid summer and its shoulder months. Oppressive heat will spoil your fun. Winter is best, and even cool at times. This makes it perfect for wandering snowbirds.

When you decide to visit Las Vegas, it’s nice to know that a comfortable, and secure campground is available in the form of Sam’s Town KOA. While Las Vegas is a bit out of the way for those who winter in southern Arizona, and California, the adventure is certainly worth the trip. You just might encounter some special prices at the KOA that you didn’t expect until you view their entrance sign. Their always friendly staff is waiting to help you.